Do you like X Factor?
I do, but I only watch the beginning, the auditions. It's most fun to see how people go to sing, convinced that they are great, but in reality, they can't sing and they are not great. From a whole crowd maybe two or free people have got talent, the rest believe that they got talent. Can you see? People believe that they are talented because their friends and family support that belief. They even make it to the talent show expecting to blow minds with their ability.


Ridiculous, isn't it. We all laugh when we hear their songs, it's funny how one can be so blind and stupid. Ha ha ha.

We had this once at the tattoo shop where I work. We put an add in a tattoo magazine that we are looking for an apprentice. One of conditions was that the person should be able to draw. We had about 40 people over 2 months coming, emailing, sending their drawings by post, only one of all could draw. The rest had an idea that they are brilliant design artists, talented and amazing. Some of these "designers" brought drawings that were at a level if 5 year old drawing. Seriously, we had to tell them off. Some of them fought back, like in X Factor: I'm a designer, you don't understand art, my friends say I'm really good, how can you not see.... Again, ridiculous.

I do a lot of cover up work, it's fun for me to transform some faded horrible thing into something beautiful. It's a challenge and I like it. I get to see a lot of really bad tattoos done by idiots who think that they can draw. The most ironic one I can say was this guy, who had a Chinese symbol tattoo done at one of the worst shop in town. The symbol was out of shape, patchy, scared, horrible looking. I said, what does that mean? He goes: "awareness"
Hmm.

So going deeper here the biggest problem I see is that people can not see!

How is this delusion happening? It happens for two reasons:
1: people can not see.
2: even if they can, they support the lie because they do not want to hurt the person's feelings.  Dishonesty with self and others. 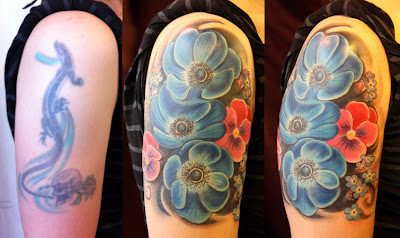 Let's say your friend gets a tattoo and you see it's really rubbish, do you say directly- look, friend, you should sort your tattoo out, cause it's crap. Most people just look and say: yeah, nice.... So the person with bad tattoo starts believing that it's really good! Wow!

It happened that this girl came in with most horrible large peace on her back showing heaven and hell which looked that a kid drew it and tattooed it. She was proud of it! I had to pierce the bubble of lie and in the end she thanked me for saying truth, since nobody before did. The tattoo was beyond repair, there was nothing that I could do with it. It was that bad.

So nodding heads and saying, yeah nice, just adds on to the grand delusion.
That's how our world runs. Dishonesty, support of illusion is everywhere. Every time you lie, the belief is strengthened. So next time you hear "yeah nice", just check for yourself if it really is so.

You have been lied to your whole life. Is it possible that you accepted the lie, because it made you feel better? Is it true that you lied to others to make them feel better?

Here we go, that is how blind are leading the blind into more blindness. Is it possible that you believe that there is a you who runs your separate life only because everyone else supports this lie? Is it possible that you believe that you are the ultimate power of universe because you like this lie and people around you support this for each other? I am amazing creator of all that is- it's a lie.

It would be so cool, if you could see!

Imagine, that you do not exist. Imagine that world without you is still here, people, animals, nature, all here and there is nobody in charge of running life. It all flows by itself, humans, like ants, know what to do when to do because life force is moving them. Stars, galaxies, all real. Imagine that all life is, but you isn't.
Can you do that?

Cool, now imagine, that it's true.
See how everything starts making sense? Life just is.

Now go back to what you believe that is true. Is it true? Is it?

Can you imagine life without self?

If you are here, reading this, coming to these enlightened blogs, ruthless arena it's because you know that you can not see. Is it clarity that you seek?

There is no you to see, but only seeing.

Email ThisBlogThis!Share to TwitterShare to FacebookShare to Pinterest
Labels: ilona marked eternal, liberation, Looking inside, no self, waking up