I find that there are more and more people who accept intellectually the "no self" idea. It seems a cool idea. But how many people are brave enough to challenge that? Have you?

Thinking that you get it is just another thought. Concepts are creations of the mind. It's great for the ego to feel clever. But to get to the truth you don't need to be clever. You just need to be honest. So unless it's seen, no-you is just another concept.

How do you know that you are done?

First you actually need to do some work, which is stare at the truth. Spend some time seriously considering the fact that you do not exist. Write what you see, get some clarity, look at the world through the lens of no self. Look at the world trough the eyes of new born child.

What animates a baby? What is moving body, reacting, expressing moods and needs? It's the same life force that animates bird, cat, lion, monkey.....

At some point when toddler starts talking he says the words me, mine, I.
Does that mean that the life force becomes his? Does he then become a separate entity? Entity that moves and animates body?

It's still the same life force. Then and now. Ever present.

When do we start owning life? When does it become "my life"? The truth is, it's one life, no fish owns it, no human.

The moment humans started owning their own separate life, that was the moment, when all responsibility, all pain became theirs. If you are seeking to fix the problem somehow- it's clear  sign that you are in the loop!

Remove self from owning life, it's only life left, problems cease to exist. One by one fall down. Like the house of cards.

I work as tattoo artist. Do you think it's me doing tattoos? It's not, it's life expressing itself. 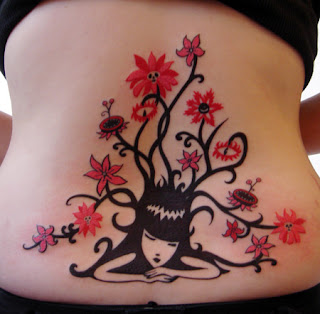 I speak to people, I get idea what they want, we talk about it, discuss details, make an appointment. Till the day of appointment I don't event think about that, let it rest. By the day of it happening the seed is grown in subconscious.

On the day first thing I do is sketch, I do not think what it's going to be, nor how I'm  gonna do it. Few lines decides the direction. It takes me little time to draw, because is not my idea and it does not need me taking care of it. The flow goes where it goes.

Imagine living your life like that, with ease, with confidence, free of conflict in the head. Thoughts are flowing, reaction, decision is happening and feeling of inspiration makes the move.

You are the flow + confusion in the mind.

So when you see that there never was you, you are done.
Created by Ilona at 16:46

Email ThisBlogThis!Share to TwitterShare to FacebookShare to Pinterest
Labels: freedom, ilona marked eternal, liberation, Looking inside, no self, Pointers, waking up