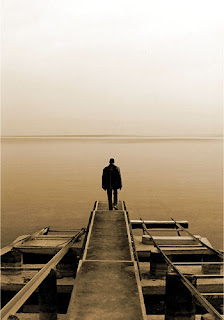 It's amazing how everything works out and how events are tied together. Synchronicity is working on many levels.

There is no you as separate self.

There is flow. There is present moment ever-changing movement. Or so it feels. One can zoom in and see stillness or zoom out and observe patterns. It's like currents in the ocean of time.

Time does not exist in reality, but in 3dD world of characters and stories time is the ether in which everything ocurs. Events follow events and one can feel the endings and beginnings, just the same way as one sees the waves of the ocean. Spring, summer, autumn, winter. Can you feel the flow? In the story we are on a planet which is spinning around the sun, sun is a part of galaxy and moves around another star. The planets move in their orbits. Everything works in harmony. It's just the law of nature.

Just at the beginning in april ( Easter) I have finished to read Jed McKenna's trilogy and turned my eyes inwards. It was the first step which was followed by ripping to nothingness all kinds of belief, days of pain and autolysis. Then a whole thing slowed down and the last blow of illusion of self happened. That was in September.

My choice was to follow the path of least resistance and I used clearing techniques wherever I felt inspired to. The focus was on truth. I never read another book, never turned for answers to somebody else.

I joined the ruthless and it has definitely been something else.  Madness maddened, but working. The system is sound. I recommend to dive in and finish the lie, then help others, as this is perfect way to cut the bullshit out. So I became a part of a group. I saw inspiration flowing, timing was perfect. I started to write this blog which effortlessly fell into place.

I feel the ending of the chapter as I'm no longer with Ruthless bandwagon. Flow spat marked eternal out of ruthless, stripping all that is in a way to freedom to express without watch and command. I was following of inspiration, but something there broke loose. I see that awakening happening as a process of flow and words like genocide nor blitzkrieg inspire me.

So here I am thinking for myself, rather than going with the ruthless band. I'm sure the ruthless way is good for those who need it, but it is not the only way to wake up. The Brutal Beginnings is not a book for everyone. I've seen people wake up in a clean and focused way, no insults and no swearing.

Anyway, I went for yoga class and heart meditation happened as well as release of stagnant energy from the spine and shoulders. The keywords that day were love, loyalty and heart. The ruthless fell off. The only loyalty is to the inspiration from the heart.

So here I am, alone again, as always. Sweet freedom and independence, exploring new space.

I celebrate today the end of chapter. The next week is holding many endings. And then a new phase starts :)

Thank you guys from Ruthless, it was fun. Love to everybody. I know that freedom is not about being nice, but I choose to be nice and I can not help it. <3