Tammy: When Curiosity Crept In The Journey Has Started.. 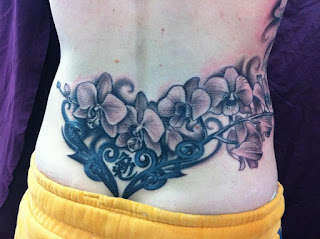 I met Tammy in my tattoo chair. First time she came in and got a branch of orchids. Soon after she wanted it to grow. Happens a lot, tattoos tend to expand over body over time as they start shrinking in the mind. First it looks big, then it starts looking smaller and smaller...

We met again for the second session and made them flowers grow. It took a while so we talked and i mentioned what i do besides tattooing and all the LU stuff. Tammy got curious. She has never heard about no self before, she has never been a seeker and never read anything 'spiritual'. Yet curiosity got her. And little by little we started talking about what is really going on here.

The realisation came as Tammy investigated the question of control, and if she is really in control of what happens. once she saw that, the rest was easy.

We met once more for another extension of tattoo and the piece is complete. Same as Tammy's journey through the gateless gate. You know, the one that does not exist.

Here are the Final 5 questions that we give to all who cross, and here are Tammy's answers. And thank you Tammy for the orchids that sit on the window in my studio. :)

Explain in detail what the illusion of separate self is, when it starts and how it works.
Not totally sure when exactly the illusion starts, but society and parents give baby/child this identity and this belief that 'i' is in control of thoughts, decisions, hearing, seeing….life etc
By living by this belief, when things go right in the individuals life, the individual thinks that this success is down to ‘me’ this is when egos are created and self praise starts. Conversely, when things go wrong, the individual also thinks that this is down to them, thus creating suffering. Thoughts and feelings of inadequacy, failure, hopelessness and sadness take over the ‘me’ that has been created and create this mental torture.
Suffering is created when the mind creates its own story to sensations felt in the body. In the illusion, this is put down to 'us' being sad/unhappy etc when really its just mind creating a fabricated story from a sensation in the body. Sensations in the body come and go, but when mind gets involved, these sensations can be intensified and lead to fictional stories being created. This mental torture is constantly trying to seek approval from both external sources and ‘self’ in order to sort of reinstate the ‘ego’ as a successful ‘me’.
By seeing and accepting that ‘me’ is not in control of anything and life is just happening without a controller, life becomes a lot more simple, more relaxed and this mental torture diminishes!
'We' are just characters acting out the role just as the script says – under no control of anyone!

How does it feel to see this?
A rollercoaster of emotions would best describe ‘seeing this’
At first is seems crazy, impossible….of course there has to me a me/i!!?? Then as questions start to get answered and seeing becomes clearer then comes the confusion! How can this be? It can't be? It is true! How can it be true? IT IS TRUE!
Then comes some anger – where have these lies come from? How can it be allowed? Why didn’t mum / friends / society tell ‘me’ the truth?
Still not done… next came some more confusion, followed by a sort of concentration phase where things were looked at and questioned closely, people, animals, life etc
Then came relief, happiness, a sort of understanding and a moment of just being! Some smiling, a little giggle, some excitement and butterflies in tummy! Questions still come up, but get answered a lot quicker and without worry.

How would you describe it to somebody who has never heard about this illusion but is curious about it.
‘I’ had entered into this with total naivety and curiosity. Unlike others, ‘I’ had not been consciously searching for years, So entered into the journey with no expectations at all, just total curiosity and an ‘open mind’ to question and look. Plus in life at the time of looking, was surrounded by like minded people, so was interested in experiencing something new and testing thoughts and understanding.
Once ‘I’ watched the documentary on decisions and saw that ‘me’/’I’ did not control decisions it provided the first piece of truth to which the rest of the journey was built upon. If decisions are made in the brain, up to 6 seconds before they become apparent/clear/acted upon, then ‘I’ am not actually in control of the decisions made like we grow up thinking/assuming.
Next was thoughts – they just come and go without any controller. All this time assuming that ‘I’ was controlling thoughts when really they are just coming and going!!
So, if ‘I’ is not controlling thoughts and decisions, then what is ‘I’ actually? ‘I’ does not exist… if unsure, try and touch ‘I’???!!!! Did you manage to touch it? Or did you touch the physical body of the character you are playing???
Seeing through the illusion is a real awakening, quite refreshing and brings about a feeling of contentment.
Once the truth is seen, there is less pressure, less worry about the future and generally a sunnier outlook!
By looking there is nothing to lose, but everything to gain!

What was the last bit that pushed you over, made you look?
Journey started just talking with Ilona whilst having a tattoo done! Then the curiosity crept in and the journey had fully started!
Coming from a sports background where success and failure is put down to the individual or team of individuals, ‘I’ had always had this feeling of unfulfillment, as if I had never achieved my full potential as a player, a coach and life in general. Life was spent constantly searching for the next thing, fearing failure and always seeking approval from others. Certain situations caused feelings of adversity, not because of the actual situation, but because of worrying what others would think. Trying to impress and be the best, rather than concentrating on the task in the here and now. 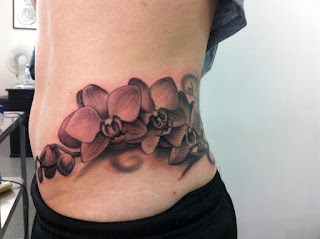 Once things started to be seen and ‘I’ realised that ‘I’ am not actually in control of any of it, merely acting out the role that has been assigned and life is just perfect, things became a lot better! Situations that had before caused anxiety, came and went with a feeling of lightness and enjoyment. Focusing on the ball / task without worrying meant 100% of energy was put into the job in hand! No point stressing about what may/may not happen, just concentrate on the present!
The final push came in a period of darkness, conflict, family drama and problems! After being wonderfully guided through this conflict by Ilona and the realisation that sensations in the body come and go, but when mind gets involved, these sensations can be intensified and lead to fictional stories being created! Everything suddenly became so simple!!!

Created by Ilona Ciunaite at 21:21