It's Okay to Feel 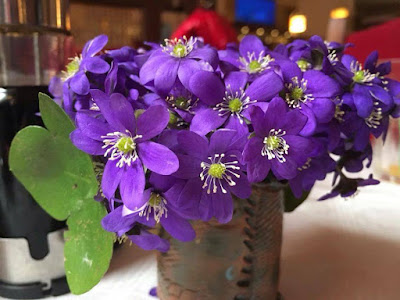 I went to Lithuania recently to visit my parents. It was great to see them again after a year and a half. I spent a week with them in my home town and shared some nice experiences.
I could see that both of them have changed since last time I saw them. My mum looked older, her face had new wrinkles, but somehow she seemed more relaxed; less suffering. Her blue eyes were shining in delight that I came to visit. My dad was keeping it up, doing his breathing exercises every day, keeping himself fit.

I noticed how differently they communicated. My dad was mostly listening and when he talked he would always throw in a silly joke. The kind of joke that is not really funny, but he enjoyed the silliness. I could frequently hear him singing some tune by himself, he appeared happy.

My mum was suffering a lot all her life. She was born in Siberia, as her mum was deported just after the war when the soviet government decided that sending people to Gulags (forced labor camps) was a great idea. She was only six years old when she and her brother came to Lithuania, alone. Her mother had to stay in exile for another few years. The little girl had a hard start in life which set her on a difficult path.


The last time I visited, she was in pain; physical and emotional. She lived in memories of the past and old hurts were still haunting her. Frequently she would remind my dad of stuff he did to her like 40 years ago. This time she shared differently. She wasn't so much into the ancient history but she was like a torrent of information about people she thought I knew and people I had never met. A few times I asked her why she was telling me this, what's the use of this information? I had no need to know who lived in the house we just passed and the what their living situation was. I could see how my mum was trying to share what she learned from others. She said people come and tell her stories, so she was just repeating those stories. Even though they were useless and boring to me, I guess she just wanted to talk and did not care much about what she was saying. After she told me yet another story about someone that was doing something, I asked her- 'mum, why are you talking about other people so much?' There was a pause. She was looking for an answer. - "Perhaps they did something hurtful to me', - she said.- 'I can see that', I said- 'but talking about them is not going to reduce that pain.'

I could then see how putting attention on someone else and their problems she found a way to distance herself from her own pain. It's like pointing at something that is wrong out there so that one would not need to look inside and feel.

In one of our conversations I had with my mum and dad, we talked about suffering. From what I've seen, suffering is feeling bad about something and wanting that feeling to go away. The problem that the human has is that they only want to feel pleasure and avoid pain, which is considered normal. But, being open to and wanting only happy, light, joyful feelings and resisting the 'negative' feelings is exactly what suffering is. "I should always be happy no matter what" - that's the idea that is responsible for the unhappiness. No state is permanent. The mood changes like the weather. Sunshine is not always there! Sometimes it's a big angry cloud with lightning and thunder, covering whole sky, with no gaps. But all clouds move, big and small, dark and fluffy, there is no glue in the sky that would stick a cloud in a permanent place. So are the feelings that arise. There is no glue. There is no hook. All feelings pass. Resisting that feeling that is already there is not going to move it. There is a way for the heavy feeling to move, but trying to get rid of it is not what we need to do in such a situation. Instead we just need to stop trying. Only by feeling that feeling fully, openly, with acceptance and okay-ness, that energy formation can change and dissolve. Any notion of resistance or feeling it in order to get rid of it, is not going to help. Well, if the feeling is here already, it wants to be felt. So what is the problem with that? It's okay to feel; nothing will happen. It's a sensation, not a permanent state.

Imagine a game of cards. There are red cards and black cards. The game can not be played only with red cards. A whole deck needs to be in the game, not just cards you prefer. So what that a black card is in the hand when you need and want the red one, the game goes on. The game is not asking you what cards you like. It gives you cards, without your consent. And that's the thrill, not knowing what comes next. Maybe it will be the lucky set of cards after a string of loosing; or maybe not. The game involves all cards, human life involves all spectrum's of feeling and emotion. And it's okay.

I had a feeling that my mum understood what I was trying to say; that sharing about someone else's pain is not going to take attention away or reduce her own. If the heart is hurting, it needs attention. It wants to heal. The wound can not be ignored. If it's time for it to be cleared and healed, it may involve those painful emotions, those sad memories and intense unwanted feelings. And, it's okay. There is no point in trying to fix the situation by resisting it.

Some feelings may not pass as quickly as the others and that's okay too. Once the idea of happy ever after drops away, so does the need to get into a better state. There can't always be summer, there is a time for winter too. Although I don't like winter, I much prefer summer, I can not make the winter go away before its time. There is no point in trying to change the natural cycle. This can only bring suffering.

There is a difference in my experience- before seeing that separate self is a concept, not an entity, I was seeking for the happiness that would stick. Now, there is okay-ness, an option -not to resist whatever feeling state is here. There is a knowing that 'this too shall pass', and all that needs to happen- happens in the right timing.


That sort of trust in life, that all is well no matter how it appears. There is no more trying to escape feelings. No more need to distance myself from feeling hurt. The idea of escaping reality no longer makes sense. I can relax into being and live life as it presents itself, with ups and downs, bliss and hurt, without chasing an idea of a happy tomorrow.
Created by Ilona Ciunaite at 20:07

Email ThisBlogThis!Share to TwitterShare to FacebookShare to Pinterest
Labels: how to deal with feelings, Ilona Ciunaite, liberation unleashed