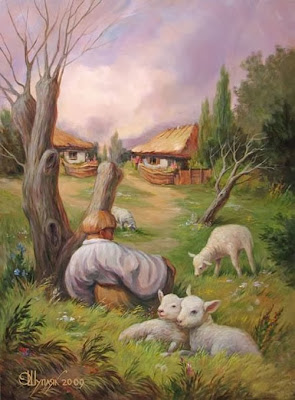 We say- once it's seen it can not be unseen, that refers to recognition. In other words- what is recognized, will always be recognized.

Let's say you meet someone and ten years later you meet her again, instant recognition happens. It's underneath thinking. Recognition is something that operates outside of thoughts. So you meet that person and she is recognized, simply because she has a unique face, body structure, particular voice, etc. It's like learning colors in childhood, a kid is shown the color and he is told that it's called red. Red is recognized any time in life as red. You hear a song once, second time it is recognized- I heard that song before.

When we look at what is obvious, recognition takes place, aha moment. We don't need to philosophize or make logical connections to simply recognize what is already always the case. It's difficult to see the illusion of separate self only because it has never occurred to deeply question this assumption of "I am a separate entity". I thought is assumed to be me, the doer and thinker, a subject with free will and choice. When we start digging around this, it becomes obvious that "i" can not be found. And when this is faced head on, recognition happens. There is no separate self- can be just words, that raise your eyebrows, or knowing, that is beyond thought.

Gateless Gate is crossed when recognition happens- there is no one to cross and there is no gate. It's one moment of realization and in that moment seeking ends: there is a subtle pause, restart, the seeker is dropped, no more looking for what is looking, no more question of "who am I?" It's recognized, that there is no separate self, no I, no entity that is in charge, no I that identifies. What is - simply is, without any manager, orchestrator, puppet master pulling strings. Life is just happening and all is happening within it as it. Nothing is separate from anything else.

Recognition is a moment when we know that we know. It's something familiar showing up, it may have been forgotten, it may have been denied, but once that recognition happens, it is not possible to unrecognise that pattern. So once the seeing happens, once it becomes clear that separate self is an illusion, it can never be truly forgotten again. Different situations arise, different levels of intensity, but what has been seen can be seen over and over again in every situation. It's not hidden. Just like the person you met once can be met again and again, she will be recognized as her, not someone else.

When we look at what is obvious, without thinking, without trying to fit into models of reality, or match descriptions of teachers, there is intimate instant recognition. This is all there is. This is what is happening now, the rest is a story.

No one can convince you that you recognize something, of course you can pretend and say that you do and make logical explanations about it, express opinions and even have debates. But deep knowing comes from within, from looking for yourself, from wanting to know beyond doubt.

Funny, we can stare at a wall of imaginary prison, feeling stuck, waiting to transcend it, and not recognize that there is no prison, that the wall is imagined. We believe all kinds of stories and try to escape this, resisting, denying, expecting something other then this and getting lost in fearful thoughts, when all is needed is recognition- there is nothing here that is bound and limited. There is no prisoner that is trying to escape, it's all just a habitual story in the head.

When we recognize story to be just a story, not reality, the glue that holds us stuck in the story is melting. The story is no longer believed to be "the truth of how thing are". It is recognized to be a description, interpretation, entertaining thoughts, it becomes easy to step back and notice that there is something else going on besides the thought story, it becomes possible to notice peace underneath all thoughts.

This, that is happening right now, is not bound to the story, it just is. And if story arises, it is seen as part of what is, within it. Not the driver, not the separate self, just a thought story about what is happening, that is happening along the sense perceptions, feelings, AS thoughts. And sense of self can arise, no problem with that, but it's too recognized to be something that arises and passes away, like the rest of phenomena. Sense of self is no longer seen as something solid, permanent, existing of itself.

Recognition is not intellectual, philosophical or matter of logic. It does not involve thought. It's awareness that something is true. Like a déjà-vu, a sense, that "this has happened before" recognition is a click- aha point- that's what we are talking about- a moment of cognition of something that we already know. It can be very subtle, as in a way it is a drop of belief.

Seeing that separate self does not exist is not something new, it's something that has been known all along, just hasn't been recognized as IT. When recognition happens, old beliefs fall, everything is seen in a new light, a change in perception happens. That means things are no longer seen as before. Nothing changes, but everything looks different.

In Christmas spirit, when kid recognized that Santa was never real, a belief about the magical super creature falls, he gets that all the mystery of presents is no longer a mystery, it was a belief in fairy tale, no more then that. He can no longer belief in Santa, no matter how convincing parents can be (and why would they?), he knows, it was an illusion. And even then, Christmas and presents a can be enjoyed, a game can still be played, but no one gets fooled by it. He now can tell other kids about this realization and so in turn the little believers in magic can see the truth of Santa Claus.

Crossing the Gateless Gate is an opening to further explorations, it's not a "done" point, but rather a single most important recognition of emptiness, from which onward life is no longer the same.

Created by Ilona Ciunaite at 13:50