It's Just Thoughts, All the Way Down! 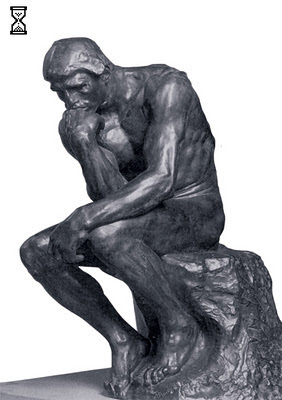 I love the clarity of seeing it for the first time. It took many months for Walbart, it really was epic. Here is what he wrote in the end.
It's just thoughts, all the way down!

I've been writing lots but am a bit wary about what to post here. I'll try to keep it brief.

The movement of this body
through the story (life)
creates the character.
The character, Me
believes it is the body. Or that it's inside the body,
or controlling it.
The character isn't really Me though.
(It's just actions, or characteristics, a role, a movement)

There is no "character" as a thing.
There is no "me" as a thing.
"But I am thinking! I know I am here!" - just a thought.
Thoughts produced by the characters' movement within the story, created by the movement of the body through life.

The human being is a mirror that receives and reflects experience back onto experience, but slightly changed due to the unique filter each one of us has.

I keep looking. Every thought that comes up is just that. A thought. Even the ones screaming about struggle and enlightenment. Nothing is going to change. Things won't look brighter, and my eyesight won't suddenly take on superhuman attributes so that everything glows and has an aura.

There is no thinker of thoughts. I am not thinking thoughts. "I am" is just a thought.
"But this feels like me" - thought, sense of self, not me.
Just the body, the brain, the story, the character.
If there's any identification with anything, remember that's only a thought too.
Any "I" is a fiction.
A thought can't ever be a Me.
And "I" is only ever in thoughts.

The brain thinks thoughts. Like breathing.
There is no ego to have a problem with. Just thoughts. Get to the right vantage point and see it's ALL just thoughts.

Anyway. What I'm seeing right now is It. It won't get any better or different. Maybe I'll just become more aware of the filter. Every thought of Me is just a thought. Thoughts of wanting things to be different, better etc are just thoughts. They aren't real. But they are good because unsatisfactoriness, however brought on, is like a fire-lighter. They instigate change, movement, which in my case was going from being asleep and complacent and dumb, to wanting to figure out what the deal was. The discomfort and longing is like scaffolding which can now be discarded.

I feel strange. Good. Is it possible that belief in a separate "me" has dropped away? And that I'm actually seeing this, rather than just understanding it? There's obviously still some work to do, like, ALL of my other questions! But am I done? What's new? Has anything changed?
I understand that I am not the body/mind, as those seem to be objects within awareness, or experience. Although I can't feel my brain, which is where senses are received, so technically "I" could be that. But hold on, what I am seeing is that this thing I've thought of as "me" all my life doesn't actually exist. And that isn't locatable. A few days ago I said "me" is this body's character, so I'm the body/brain. But this assumed separate me as a thing does not exist. The character doesn't exist, and that's what makes "me". The character doesn't exist as a separate thing.
The thing that produces "me" does not exist. So "I" don't exist either.
The movement of the body through life, or the story, creates the character. The body then seems to take on the role of this character that is just its own actions, conditioning, flavour, characteristics, preferences, apparent "choices". The body doesn't ever "think" it is this character, but thoughts are produced mechanically which enhance a belief system in a personal identification with the role.
And it's all just thoughts. So deeply ingrained and familiar that the thoughts take on a life of their own, creating the illusion that they are being thunk by a thing.(More thoughts).

"I am struggling", "I can't see beyond thoughts" - yes, just more thoughts.

What is behind "I"?
What lies at the end of an "I"?
Follow me, where does it lead, don't get lost.
Remember, there is direct experience, and then thoughts about direct experience.
"Where am I then?"
"Where is the person aware right now?"
Thoughts. The brain reflecting the body's apparent searching. Actions. Thoughts.
No thought can be trusted.
What am I?
Nothing, there is no me.
I am is all thoughts. Anything seemingly "internal" is a thought. Or a feeling. Or a sensation.
All my dialogues trying to figure this out.... just thoughts. Thinking. A process. No thinker. Reflections.

I've probably over-cooked my point. I feel great. Bring on tomorrow's doubt. But this time I think I'll know that it'll just be another thought.
whole conversation is here

Created by Ilona Ciunaite at 17:38