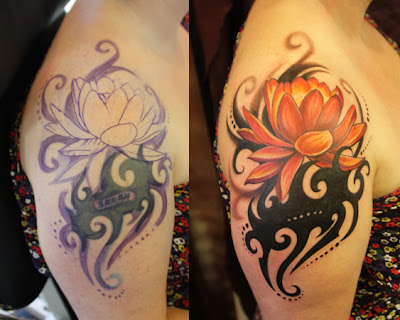 I love doing cover up tattoos. Every time I get a chance to transform something old and ugly into something fresh and beautiful. Love the feeling.

Same with helping to open eyes.

The last few days have been quite interesting. Examining, for the first time really, the notion and experience of self, of me. I'm a bit puzzled by the fact that the assumption of self has been left unscrutinized for so many years and amazed by the ease with which any notion of self is dissolved by asking if that notion is really true...

So you asked to bring my self to you for further examination. Problem is, I can't really find a self when looking for it. Yet, something seems to be holding me back; as if I cannot really accept the fact that there might actually be no one there...

I would describe the place I'm at as clinging to a very vague, yet very intimate and familiar "sense of self".

I'm happy to announce that I have not turned into a vegetable.

Also, I have not suddenly gained supernatural powers. I would like to speak to the management about this.

Kidding aside, I understand that it is customary that any newly liberated write up a big post about their experiences. I'll give it my best shot.

It is difficult to point down "the shift" to a particular moment. In retrospect it is more like a process that took a couple of days, a process of a misconception (" there is a (real) self") being seen for what is. Reading some of the material on this forum, some of the associated blogs and really taking time to seriously examine the notion of self was a very helpful preparation for the letting go. And it is quite simple really. What is asked is to simply, quitely and without interruption look at all the assumptions, beliefs and conceptions of the idea of "you", the one living your life, the sailor that steers your boat on the ocean of existence so to speak.

Looking at this, really looking at this question: " What is referred to when I speak/think of "me"" is a big taboo. It is seen as either a pubescent attempt to find ones place in the world or a deluded question asked by nutcases, schizophreniacs or new age softies. It is considered to be self-evident and in no need of further scrutiny.

Well: it is. There is nothing there. Absolutely nothing. Never been and never will. Void, emptiness, nothing at all. Just a messy knot of unchecked assumptions, memories and a drama story that wouldn't look out-of-place in a soap opera.

I understand a lot more of the way that language has been used here on RT in order to point to the truth of this, that there truly is no self, especially the harsh language. You somehow have to get the full attention on that which people call themselves. I guess that for a lot of people, anger, defensiveness and a sense of being attacked is the right trigger to get this self-idea clearly in the picture. Then that can be examined and shown to be wholly fictional.

For me, the trigger was fear. As I posted earlier, it was a deep-rooted fear of losing control, of " turning into a vegetable" and not being able to take care of myself and my loved one. A very real, visceral fear that was experienced very tangibly around the stomach. A very familiar fear. 315 gently guided me to really look at this fear. What was it protecting?

At this point, something interesting happened. The eyes closed and the feeling of fear became clearer and more pronounced. All that was done was looking, simple looking. No effort, no straining, nothing. The tightness of the fear released and what remained was warmth, radiating outwards. It was clearly seen that the "self" that was thought to be protected, shielded from an apparently hostile world, was not there. There was literally nothing to be protected.

What really did the trick for me was 315's empahsis on acknowlediging this fear for what is- not trying to negate it, run away from it or any such thing- just look it straight in the eye. What is it trying to protect?

i can see that the knot is loosening. good. now step forward. no you, never was. see it. let the seeing happen. there is no you really to let it happen. just let it unfold.

You are seeing it already, just the mind says that no, it's like being used to one thing and expecting it to be same.


These words pushed me right over the edge. What I needed was a real faith (perhaps trust is a better word) that what was being pointed to is really actually the case. There was an instant of not knowing anything, not doing anything and then the belief in self fell away completely.

Quite a bit of physical phenomena came up with that, as the knot of self untangled, very intense waves of heat were felt throughout the body. Even now, the senses relay information much more intensly. It is as if reality, experience is seen in its complete vibrant aliveness. There is no one experiencing it, seeing it through layers and layers of assumptions, fears etc. Much more direct.

Where there was this knot in the stomach there is now quiet emptiness, nothing.

For the rest, nothing much has changed, really. I had these ideas of seeing through the illusion of self would be a dramatic moment, a great achievement with the audience gasping in excitement. No such thing- the only thing that happens is that the story of self is seen for what it is- a story, a work of fiction. This it has always been. It simply was left unchecked and taken for granted.

It's funny to realise that there has actually never been a self behind it all- that it was simply the one great unchecked assumption that just needed one honest glance to dissolve. That is really all it takes- one instant of really seeing it for what it is.

Experience now is pretty much the same as it was earlier, exactly the same to be precise, simply ordinary everyday existence with assorted thoughts and feelings. The only small difference is that it is now no longer assumed that there is anyone experiencing it, there is just this experience.

That's all I've got at this moment.

I really want to express deep gratitude to 315 for the gentle pointing and giving me that final push.


Now go free yourself from imaginary self.

Email ThisBlogThis!Share to TwitterShare to FacebookShare to Pinterest
Labels: ilona marked eternal, liberation, no self